Heart driven songs combined with a beautiful tenor and fluid guitar playing, Michael Veitch is highly regarded by many of his singer-songwriting peers. His music visits the past without regret and the future with an optimist’s eye while his lyrics and melody weave a narrative of world class performance.

It’s every person’s dream to get to do what they love, intertwining that work with their heart’s passion and making a difference in the world. And that’s exactly how Michael Veitch lives his life.

Some musical highlights: Judy Collins covering his song “Veteran’s Day” for her CD “Bohemian” and live DVD “From the Temple of Dendur” both duets with Kenny White. Michael’s version reached #3 song on the folk/Americana DJ list November 2017 from his EP “Wake Up Call.” Being honored by the Music2Life Foundation for his song “Pledging Allegiance” -which reached #10 on the Folk/ Americana DJ list October 2017— being featured with Ellis Paul, Vance Gilbert and Jim Henry for a full set at the 2001 Newport Folk Festival, opening numerous dates for Shawn Colvin and sharing stages with the many fabulous singer/songwriters out there.

BIO: it all started….

A boy who sang before he talked, when Michael first heard the Beatles as a young child, he knew then that music was what he wanted to do for the rest of his life.

” I sang a lot of Gregorian chants as a kid in church and heard a ton of rock and roll growing up. My oldest brother collected 1950’s 45’s and wired our house with speakers so I was exposed very early to Elvis, Chuck Berry, Little Richard, The Platters and Jerry Lee Lewis. Plus many more-it’s in my bones I think. Thanks Tom! And then came the Beatles. I had the right progression I think. Experienced it in real time.”

“I also had the good fortune of working with John Quinlan-Frank Sinatra’s vocal coach- I was very young, about 23, he was pretty old, about 80. I took about 6-8 months worth of singing lessons from him in Boston Back Bay back in the 70’s. I was in a rock band called Teaser and we all went down once a week just for the lessons. I think it was $25 a half hour. He had worked with Aerosmith and other rock bands and was quite thin and frail. He told me I had a natural gift of a voice and to quit the cigarettes ( pot was ok) , that he had worked with Sinatra “and all of the greats”, that he wrote a book with Sinatra and that he had been a total prick his whole life until he had a near death experience on the operating table with a major heart attack. He said he was trying to stop the doctors from bringing him back because he had been such a terrible person his whole life. Well, they brought him back and he said he turned over his life completely, gave up drinking, dropped a lot of weight and blood pressure, and mellowed out. He was going by the name of “Dante” then, but it’s the same guy. I even remembered some of the exercises when I went through his and Frank’s book recently.”

And the same passion that propelled his love of music, and later on song writing, is also what led Michael into environmental and social activism, where he holds a degree in Community Action. Michael is also a professional photographer and has taken up painting-someone who already had an eye to capture life in a single picture, his songwriting mixed with activism mirrored his same ability to capture snapshots with pen and ink. Michael writes songs about real issues and explores a deeper range of those of the heart.

Having worked for many years as Vermont’s statewide recycling advocate, battling for clean air, water and fair government, Michael attacked huge multinational waste corporations to prevent them from burning trash and polluting the environment. He worked for progressive candidates and ran as an independent progressive for Vermont State Senate in the early 90’s.

“I have to give many thanks to The Vermont Public Interest Research Group and my mentor, Joan Mulhern. Without her, and VPIRG, I would have been just another voice in the wilderness. They helped my voice cover a lot of ground and I hope it made some difference in people’s  environmental lives.”

In 1994, after running for Vermont State Senate, endorsed by Bernie Sanders

and Peter Welch, and losing to Peter Shumlin, Veitch decided to concentrate on music and writing full time. But when Shawn Colvin was handed a CD of Michael’s music, Shawn enthusiastically encouraged him to perform his music out on the road and open some shows for her. She also raised a very significant amount of money for the state senate campaign! Eventually Michael opened for Shawn on tour and at other gigs, meeting many of his musical heroes. While opening for Shawn at a well-known Washington, DC venue, George Stephanopolis, who was in attendance, invited Shawn and Michael on a special tour of the White House and to meet Bill Clinton in the Oval Office. Veitch realized the irony of the situation – that it was music that got him into the White House and not strictly politics, something that confirmed his belief that he could do more to raise awareness of serious issues and affect change by performing. His songs carried his message, echoing the tradition of troubadours like Woody Guthrie, Bob Dylan, Pete Seeger, Odetta and Billy Bragg. And it was also during an anti-war rally in Washington DC, that his combination of music and activism that allowed Michael to share the stage with Jesse Jackson, Patti Smith and Ben Cohen (Ben and Jerry’s) which was filmed and later shown repeatedly on CSPAN.
l 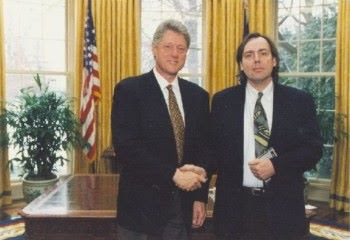 Visiting President Bill Clinton in the Oval Office. I was accompanied by Shawn Colvin and Leo Kotke and Simon Tassano. Feb. 1994-a great time was had by all!

“Shawn was great and I truly thank and love her for stepping up and giving me encouragement and a much needed hand. I met so many of my heroes through her-Jackson Brown, Richard Thompson, Lucinda Williams, David Crosby, Leo Kotke and many more. She sang on my first record, a song called “Anybody But You” and asked me to open a ton of shows for her. It was produced by the same guy who produced the “Blue Oyster Cult”- Murray Krugman, and I even played the very same guitar for my song that was used for the iconic “Don’t Fear The Reaper” licks. ”

Michael recently spent two years living in Munich, Germany and since 1999, has made his home in Woodstock, NY. He has written and recorded with many of its greatest musicians. The most recent project is “Wake Up Call”- an EP of politically leaning original acoustic music. Another recent project is “The Veitch Boys” – a homage to the surf and sun and the great music those West Coast bands gave us. Jerry Marotta on vocals, Pete Levin on keyboards, Eric Parker on drums, Madeline Veitch on vocals, Julie Last engineering. Jack Weiner is doing some of the artwork for this project.

Here’s the link to the band camp site for “The Veitch Boys” http://theveitchboys.bandcamp.com/album/the-veitch-boys-e-p

Another recent release is Michael’s 2013 “Postcards From Vermont Vol. 1”

Many new songs written in Germany, along with some Vermont themed music from the Veitch vault. Acoustic, edgy, melodic singer/songwriter, all with a nod to a Vermont story from Veitch’s past. Brother Rick did the great cover art. Available as a download only-for a free download, go to www.distrophonix.com and input the code: 1WWHT3IV for “First Snow of The Year” and “Sunday Driving” For the YouTube video for “First Snow” go here: First Snow Video

He completed Painted Heart in 2007 with Julie Last producing and some co-writing and was joined by Jerry Marotta, Artie Traum, Pete Levin, Bar Scott, Ed Sanders and many other super players and singers. “It’s the album I’ve always wanted to make and I think it’s a keeper.” said Michael. He was also completing by himself a 1200 sq ft addition to his Woodstock house. “When I wasn’t hammering nails, I was laying down tracks at Coldbook Studios in Bearsville with Julie Last, which is probably where the “holding up the rafters” line in the song Knock Me Down came from.” said Veitch.

Recording and writing has taken on a life of it’s own for MV. A very large body of work is accumulating  for future release. Check out his blog: Veitchmunich.blogspot.com.

He has also just completed a new batch of tunes co-written with an old friend from High School Rock and Roll days-John Lynch. Tragically, John passed away suddenly just as the album is finishing up, the “Stone House Project” was set for release as a “Kickstarter” project in the Spring of 2012 but has now been put on hold. 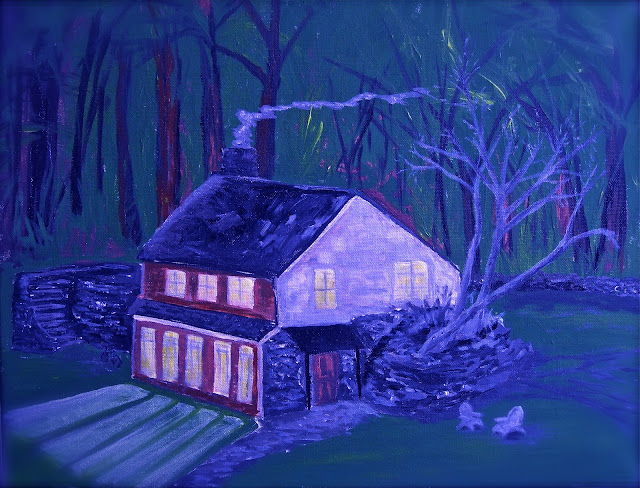 With his feet firmly planted between his love songs of life and people, Michael’s fourth CD, Heartlander, is a mature collection of material – songs based on real life events, like Sanctuary, about a police shooting in a Vermont Church; the anti-war anthem Veteran’s Day ( covered by Judy Collins); and songs exploring other topics including sexual abuse in the church and the desolate and heartbreaking poverty in a land of plenty. Veitch deals with relationships both hopeful and dysfunctional, as elegantly showcased in the arresting, For My Dear Life, about the universal longing we have all experienced at some points in our lives.